Shohei on Luxe/Grandpa and Japanese Style

I met Shohei a few months ago at a Whiskey Wednesday hosted by The Class Room. Shohei actually approached the group when he noticed that my buddies Levi and David were wearing Rick Owens. It was easy to notice that Shohei had a different style from everyone else, you could easily feel his Japanese vibes. Shohei recently returned from a trip to Japan so we met up to talked about what’s hot in Japan and his own personal style he calls the “luxe-grandpa”.

How do you think Japanese and American styles are related?

To summarize, it used to be a one way street but now its more of a two way street. In my opinion, the Japanese have more original ideas when it comes to fashion, but the Americans are still learning from them. I feel like the Americans don’t really have any originality. From my perspective, I don’t think there is a lot of stuff that originated in America. Maybe something like “goth-street” style, but I feel like that is one of the few things that came out of copying Kayne. Overall, I don’t see anything super original coming out of America right now.

After visiting last week, what is your take on style in Japan right now?

What’s trendy there is not even remotely trendy here. The hottest shoe right now as we speak is the Nike Internationalist, the retro runners. They are so cheap, around $70 to $80, but that’s the hottest shoe and everyone is rockin’ it. I think a couple years ago there has been a transition from people wearing really high end New Balances to people going to Nike and I think now its split 50/50. Also, one hot shoe right now is  the Airmax 90 and Airmax 1’s. They are selling out super quickly.

A predominant style right now in Japan is sort of “norm-core” style but its not strictly “norm-core”. By definition, “norm-core” is for people who are into fashion but they dress mall clothes to be ironic about it. I guess the predominant style right now is something called “city boy”. I would roughly translate it to J.Crew, plain jeans, pocket tees, and Vans Authentics/ Eras. It’s sort of like the surfer/skate west coast inspired clothes that are simple they call it “simple style” or “city boy”. The trendiest guy’s seem to subscribe to Popeye Magazine and it seems to be the dominant trend.

I got tired of high fashion. I go through different phases, but before this norm-core/west coast style I call the “luxe-grandpa” style, I was into Robert Geller type stuff. Not really super goth or anything, but fashion forward brands. Even before that I was mainly into Dior.

I think the thing that really got me started was sneakers. Back in the old days, I used to resell sneakers.When I was in college the Dunk Low SBs were the hottest thing on the market, so I used to buy a lot of shoes like Tiffany Dunks and flip for mad profit. I was into sneakers even before stuff like Undefeated and all the actual sneaker boutiques came to America and when I came back home, I found all these cool stores like Chapter that were actual specialty sneaker stores. There were so many limited editions and I think that’s how it helped me get started.

Do you think anything from the US is going to catch on Japan?

I think brands like Saturdays Surf, Pilgrim Surf+Supply and basic type styles because the city boy style is so strong.

I own two shirts and its nice. 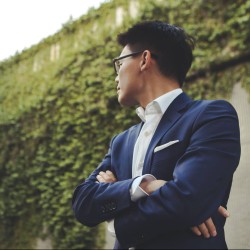